SAVED BY THE BOX SET

While we all adjust to the strange new world of ‘lockdown,’ binge watching box sets has never been so popular. Whether it’s dusting off DVD collections or sofa-surfing with endless Netflix episodes, many of us are re-watching old favourites and discovering new ones.

Unmissable Movie Locations
Scotland's stunning scenery and magnificent buildings have taken centre stage in countless blockbusters through the years. In the spirit of endless movie watching, we’ve pulled together a list of iconic film settings in Scotland together with some nearby Luxury Scotland hotels. We might not be able to physically travel there right now, but we can at least plan future holidays and go there in our dreams!

Glen Nevis
Located at the foot of the mighty Ben Nevis, the UK's highest mountain, find Glen Nevis, one of the most beautiful glens in Scotland. Here, find soaring peaks, gushing waterfalls and complete tranquillity. It's one of the most popular filming destinations for big hitters including, Braveheart, Highlander, Rob Roy and the first two Harry Potter movies. 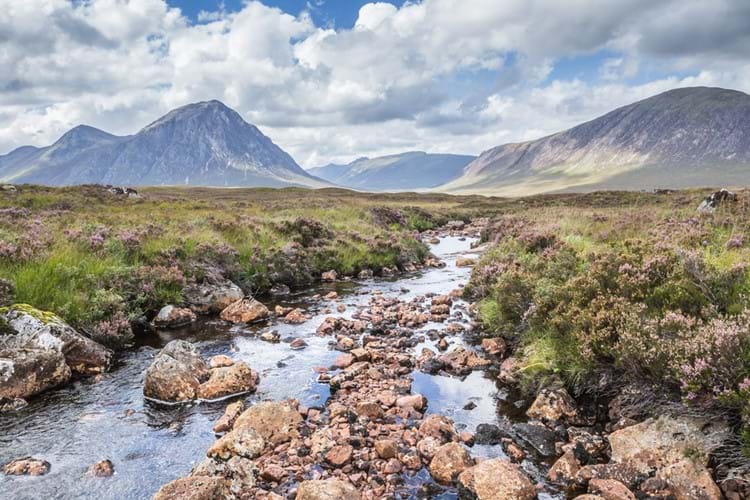 Glen Etive
A spectacular glen that encapsulates the rugged remoteness of the Scottish Highlands, the single track road to Loch Etive has featured in many blockbusters. One if its most recent appearances was the James Bond movie Skyfall, where 007 and his boss M stop to survey the glen’s deep valley, the meandering River Etive. This sensational backdrop also appears in: Thor: Dark World, Gladiator, Sherlock Holmes, Braveheart and The 39 Steps. 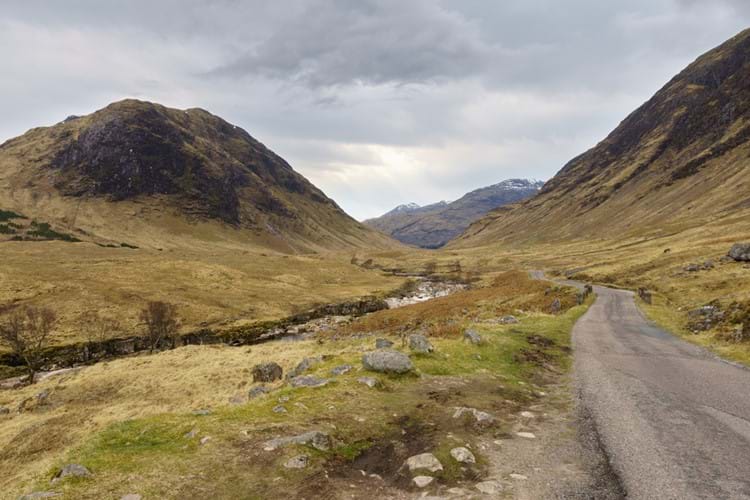 Eilean Donan Castle
A magnificent 13th century property in the Highlands of Scotland, situated on an island at the point where three great sea lochs meet, Eilean Donan Castle is arguably one of Scotland's most iconic settings. Located in Dornie, by Kyle of Lochalsh on the northwest coast of Scotland, it has taken centre stage in films such as The New Avengers, Highlander, Loch Ness and James Bond, The World is Not Enough. 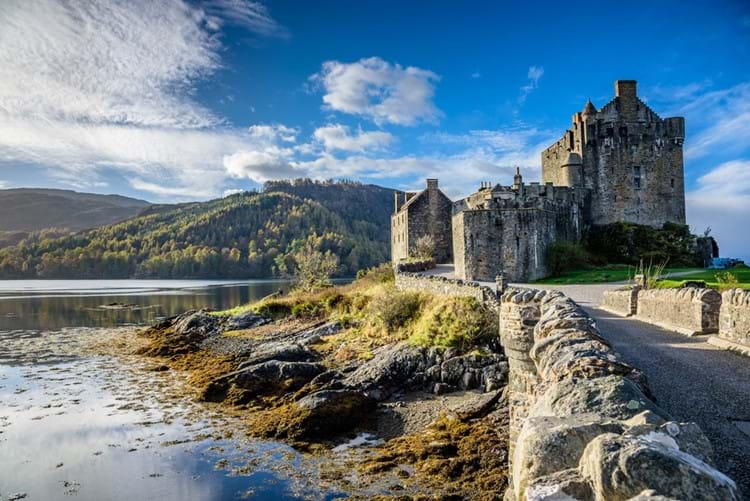 Glenfinnan Viaduct
This magnificent icon is one of the world’s most famous pieces of railway infrastructure and the longest mass concrete rail bridge in Scotland. Each summer, it attracts thousands of visitors a week eager to catch a glimpse of the Jacobite Steam Train which runs from Fort William to Mallaig on the West Highland Line. It has been used as a location in several films and television series, including Ring of Bright Water, Charlotte Gray, Monarch of the Glen, Stone of Destiny and most famously, four of the Harry Potter films. 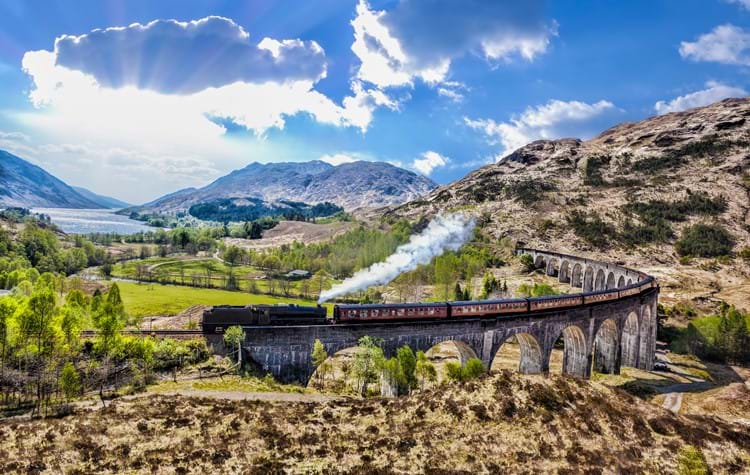 Glencoe
With its mountainous backdrop, rare beauty and haunting history, Glencoe is located in the very heart of the Highlands. With eight Munro mountains towering above the glen, the dramatic landscape that makes up this area has featured in many films, most notably as the location of Hagrid’s hut and the Hogwarts covered bridge in Harry Potter and the Prisoner of Azkaban, as well as Braveheart, Rob Roy and most recently, Mary Queen of Scots. 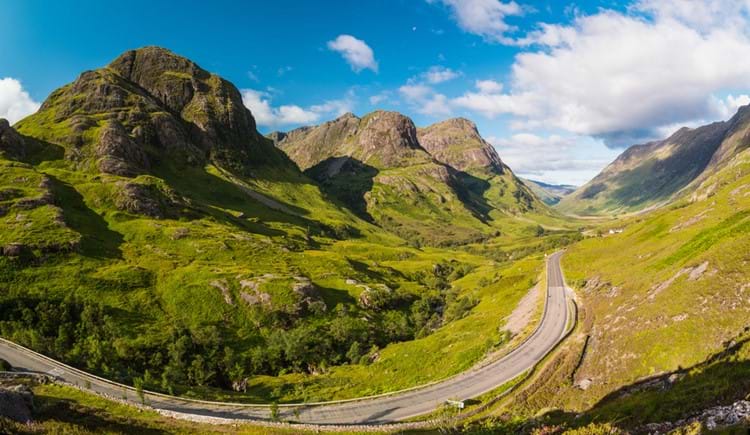 Central Scotland
A scenic strip that lies north of Glasgow and Edinburgh and south of the Highlands, this area has played a starring role in many of Scotland’s key historic events. Its diverse landscape, with swathes of woodlands and waterfalls, distant mountain peaks and a coastline dotted with fishing villages and sweeping sandy beaches, has not gone unnoticed in the film industry. One of the most well-loved movies of all times, Chariots of Fire, used West Sands in St Andrews for the iconic ‘athletes running in the sand’ sequence, while Doune Castle in Perthshire, was the main outdoor location for Outlander as well as appearing in Monty Python and The Holy Grail. 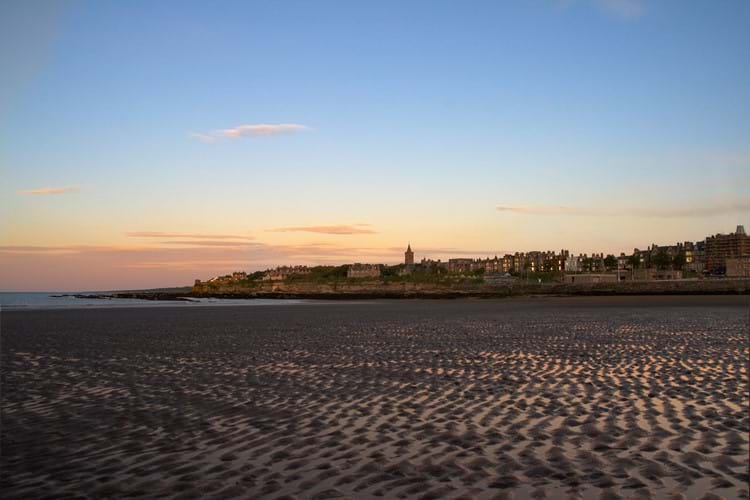 Image: West Sands in Andrews where part of Chariots of Fire was filmed.

East Lothian
East Lothian’s rural scenery, golden beaches and historic buildings has made it a popular film location choice in recent years. This stunning slice of countryside on Scotland's east coast, just a short drive from Edinburgh, has provided the backdrop for a host of films including The Railway Man, Mary Queen of Scots, Outlander, The Awakening, House of Mirth and The BFG. 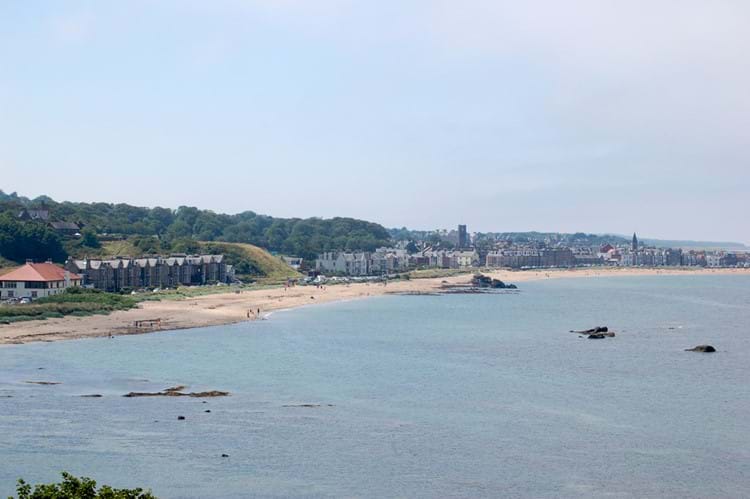 Image: North Berwick where part of The Railway Man was filmed.

Nearby hotels include:
Greywalls Hotel: in the heart of beautiful East Lothian.

Edinburgh
The city of Edinburgh is renowned for its history, architecture, scenery and cultural attractions. Recognised as one of the most beautiful cities in the world, it is little wonder that Scotland's Capital City has clocked up an impressive list of movie credits. These include: Chariots of Fire, Sunshine on Leith, Trainspotting, One Day, Young Adam and Rebus. 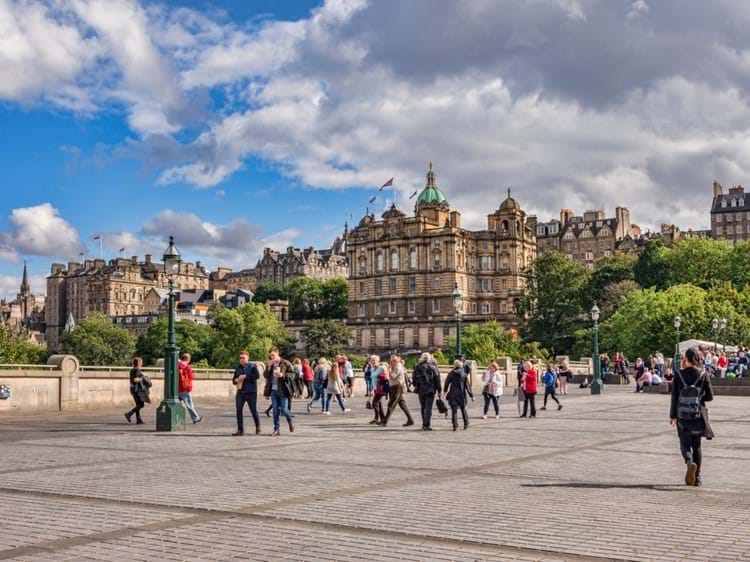 Image: Edinburgh's The Mound where scenes from Sunshine on Leith were shot.

Glasgow
Located on the River Clyde, 42 miles west of Edinburgh, Glasgow is Scotland's largest city. Standout qualities include an abundance of gothic architecture, picturesque cobbled streets and a lively, cosmopolitan atmosphere. It has recently become a filming hot-spot, welcoming in crews from The Batman (due for release in 2021), 1917, Outlander, Trainspotting, Succession, World War Z, Fast and Furious 6, The Wife and Cloud Atlas. 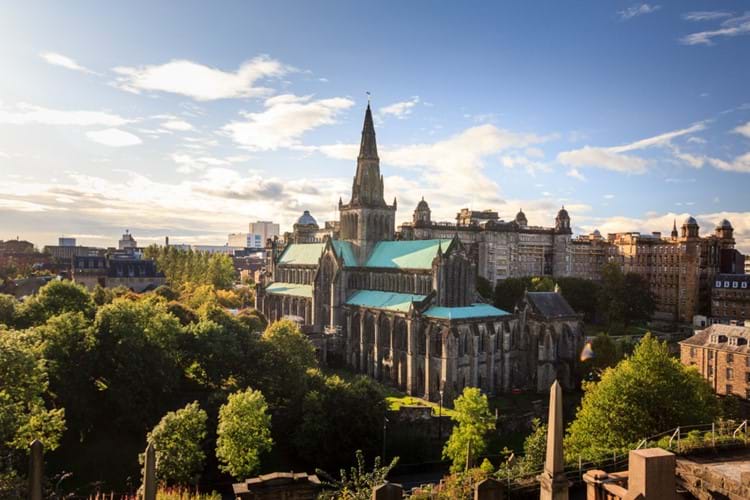 Image: Glasgow Cathedral where parts of Outlander were filmed.

Nearby Glasgow Hotels include:
One Devonshire Gardens by Hotel du Vin In the West End of the city.
Crossbasket Castle: Approximately 20 minutes drive.

Scottish Borders
A largely rural area, The Scottish Borders is punctuated by peaceful woodlands, rolling hills and rugged coastlines. It boasts an array of picturesque market towns as well as historic houses, beautifully restored castles and glorious gardens. It is no stranger to film crews, with many towns featuring in blockbuster movies, such as North and South, partly shot in Selkirk, Almost Heavenly in Peebles, Mrs Brown in Duns Castle, Melrose Abbey for parts of Shoebox Zoo, Hermitage Castle for Mary Queen of Scots and Floors Castle where the iconic Greystoke – the legend of Tarzan was filmed. 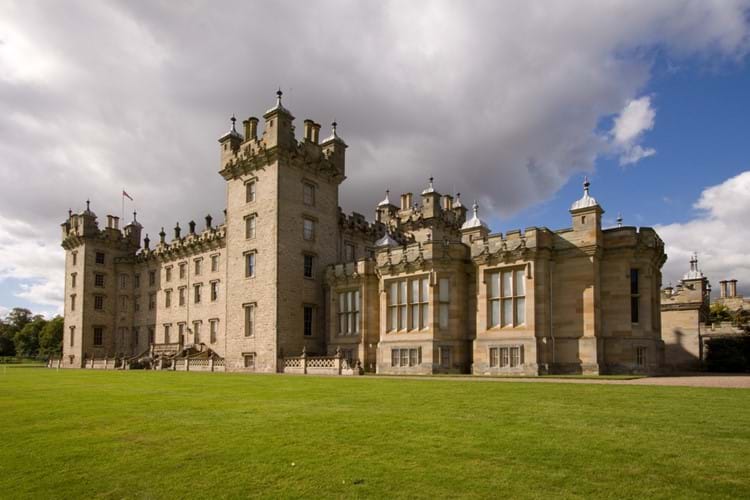 Image: Floors Castle where Greystoke – the legend of Tarzan was filmed.

Nearby hotels include:
SCHLOSS Roxburghe Hotel & Golf Course: Located in the east of the Scottish Borders.

Hotels along the way